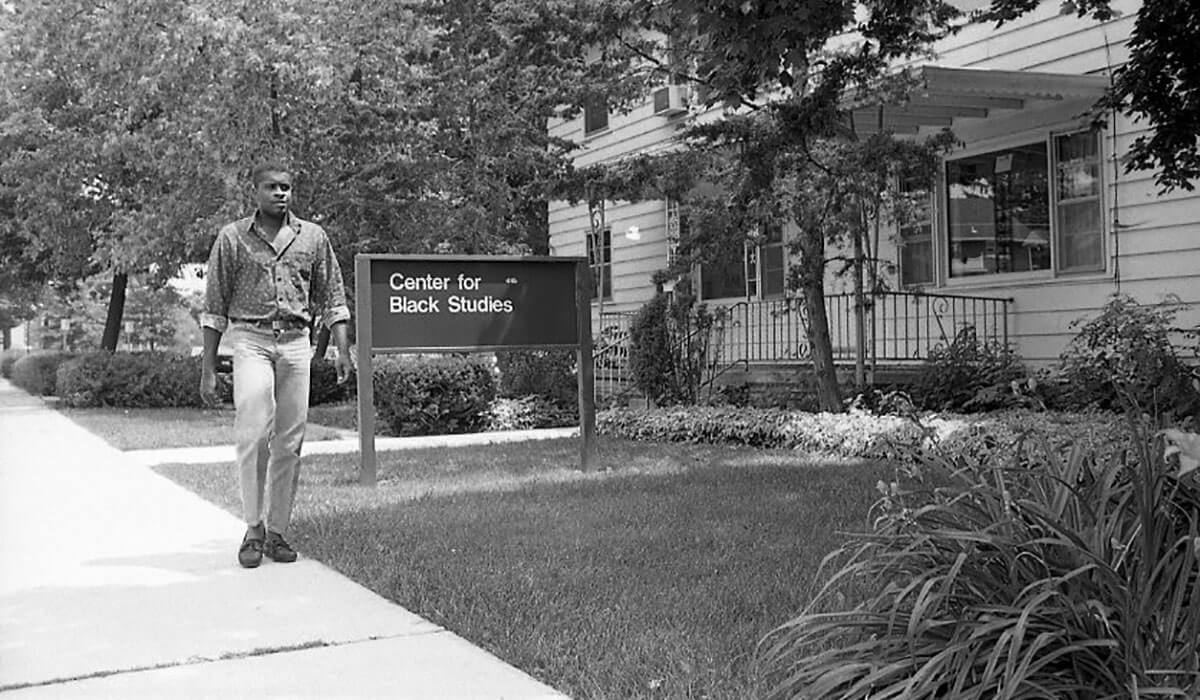 The Center for Black Studies spent its first two decades in a small house at 225 Normal Road. Then as now, CBS operated as a hybrid academic and student services program. CBS conducts research on the experiences of people of African descent and offers a minor in Black Studies. It promotes the retention of Black students and sponsors lectures, workshops, conferences and other student-oriented activities. CBS staff advise and assist student organizations, host campus visits and develop community service opportunities.

On the morning after the April 4, 1968 assassination of Dr. Martin Luther King, Jr., a crowd of students and faculty gathered in the Carl Sandburg auditorium for a memorial service. Suddenly Black students in the audience rose as one and filed out of the auditorium. Once outside the center, they hoisted a black flag on the HSC flagpole, and publicly voiced their grievances with NIU.

Less than a week later, 200 Black students staged a sit-in at Lowden Hall and demanded to see President Rhoten Smith. They presented him with a list of demands that included a required course in white racism and African-American history, a program of Black studies, more equitable admission standards for Black students from the inner city who showed potential, and a dedicated center for Black students and Black studies.

Alumna Glenda Blakemore spoke about her experiences at NIU during this period at an event associated with NIU’s 125th anniversary celebration:

Smith thought their grievances were justified and their demands reasonable. He immediately appointed three new Black administrators, established an interdisciplinary course called “Racism in American Culture and Society”, created the CHANCE program, and established a center for Black students to relax and study.

Originally located in a house at 225 Normal Road, the early center was, as one alumnus described it, a place where Black students could “retreat from the awesome whiteness of the rest of the university.” They could socialize and get help with their studies in a friendly environment, but in its earliest years, the center lacked the unique academic programming requested by the students.

The development of a Black Studies program would take three more years. Finally, in 1971, the Center for Black Studies was born, offering an initial portfolio of 30 courses and a minor in interdisciplinary Black Studies. Classes were offered through all of the colleges, coordinated by Robert T. Starks, the Center’s first director.

For more than two decades, the Center for Black Studies operated out of the small house on Normal Road. In the early 1990s, plans for a new parking garage required the demolition of that house and three others on the block. The new (and current) Center for Black Studies was constructed on Lincoln Highway between Normal Road and Carroll Avenue and features a large central classroom, five faculty and staff offices, a computer lab, a smart classroom and offices for student organizations. That facility opened in 1993.

Today, the Center for Black Studies continues to operate as a hybrid academic/student services program. CBS conducts research on the experiences of people of African descent and offers a minor in Black Studies. It promotes the retention of Black students and sponsors lectures, workshops, conferences and other student-oriented activities. CBS staff advise and assist student organizations, host campus visits and develop community service opportunities.

The Black Studies minor provides a background for understanding the experiences of Black people in the United States. Students explore the African heritage of Black people and the continuity of that heritage through the years in the New World. The Black Studies minor also helps students analyze racism and its present-day manifestations in all spheres of life in order to promote better understanding among ethnic and racial groups.