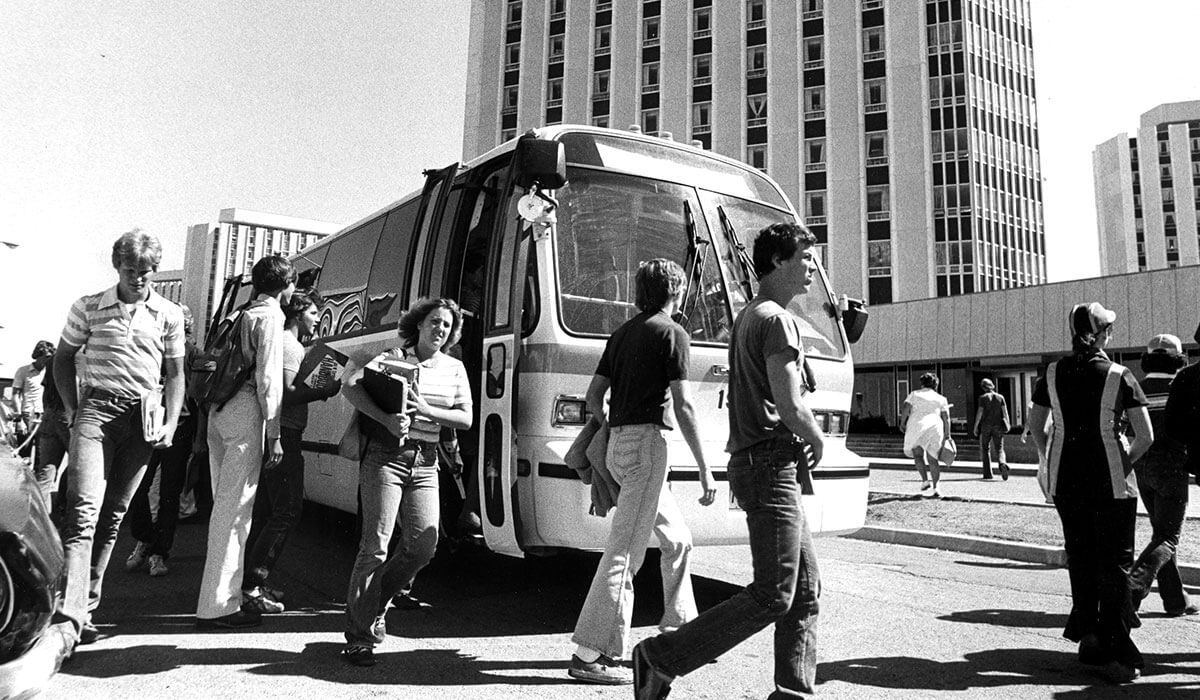 With more than 40 buildings sprawled across nearly 420 acres, nine miles of streets and 13 miles of sidewalks, footsore NIU students were enthusiastically in favor of a campus transportation system.

The rapid growth of the NIU campus in the 1960s significantly expanded the university’s physical size and shape. There were now more than 40 buildings sprawled across 417 acres with nine miles of streets and 13 miles of sidewalks. Three cars were registered for every available parking spot (15,108 vehicles registered and 4,778 parking spaces).

And all this on a campus that in mid-winter provided no protection or relief from sub-zero winds sweeping across barren fields to the west.

Students had advocated for a bus system for many years, but state funds could not be used for that purpose. The Student Association finally took the matter in hand and received approval from the Board of Regents to establish such a system. In 1970, the SA held a referendum in which students approved a $7-per-semester fee to finance a campus transportation system.

The Huskie Bus Line began operation on September 13, 1971 with five routes covering the campus, surrounding off-campus areas and downtown DeKalb. The Student Association contracted with LaSalle-Peru City Lines, Inc. to run the service. The firm provided an initial fleet of 11 “modern, air-cushion” buses, all painted “mango green and silver” except for one white bus that students were allowed to decorate and use to advertise campus events. And from the beginning to present, the buses used the west side of the Holmes Student Center as their main starting and boarding points.

The Huskie Bus Line was immediately embraced by footsore students, and by 1982, an Illinois Department of Transportation Study announced that in terms of ridership it was the second-largest bus system in the state – behind only the Chicago Transportation Authority – with 3 million riders each academic year.

In 2018, the Huskie Bus Line merged with the City of DeKalb bus operation, a move that has saved the university millions of dollars and allowed expanded routes. Today the Huskie Bus Line includes routes that take passengers south to the major industrial employment centers near I-88, and north along the I-23 commercial corridor to the county courthouse in Sycamore. The partnership with DeKalb includes special routes and vehicles to accommodate the needs of people with disabilities, as well as a shuttle twice a day to the Metra train station in nearby Elburn.