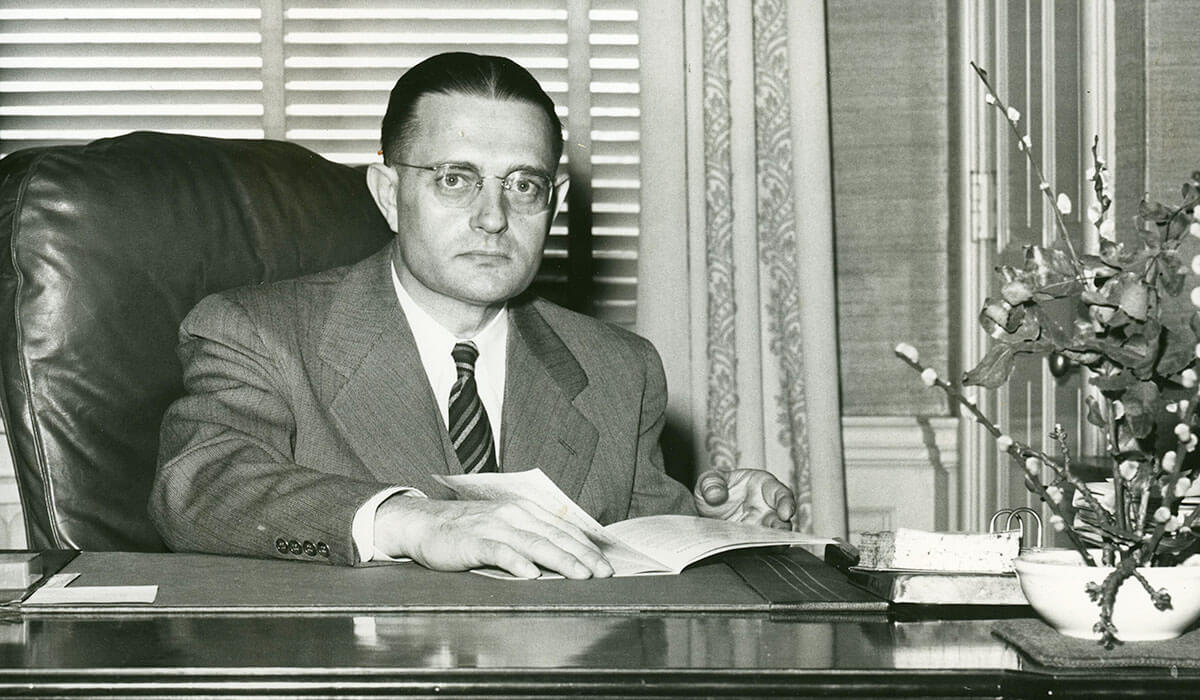 During Leslie Holmes' 18-year presidency, Northern's enrollment grew from 2,000 to 18,000 students, and 29 new buildings were added.

Following the unexpected death of Karl Adams, Northern once again went to Illinois State University for a new president.

Leslie Holmes was a native of Freeport, Illinois who loved nature, studied both geology and geography, and did a stint as a Skelly Oil Company geologist before entering the teaching profession. At ISU he was a popular professor who regularly hosted field trips to Canada known as the “Red Bird Field Courses.”

Holmes soon came to the attention of the ISU president, who made him one of his top assistants. It was from this position that Holmes was recruited to the Northern presidency.

Holmes was an unlikely candidate to preside over a period of time that could rightly be called the era of greatest change in Northern’s history. Somewhat shy and reserved, Holmes nonetheless earned a reputation as an able administrator who connected well with students. Like his predecessors, Holmes was personally conservative and religious – characteristics that would be sorely tested during the fast-changing period of his presidency. He initially shared his forebears’ belief in keeping Northern a single-purpose, teacher training school, but eventually Holmes recognized that public demand for a broader curriculum could not be denied.

As historian Earl Hayter puts it in his history of NIU’s first 75 years, “The key to the development of Northern from a small teachers college to a sprawling university during the 1950s and 1960s is found in the population explosion in the 21 northern counties of Illinois.”  From 1940 to 1950, 86 percent of the state’s considerable population growth was in the northern Illinois region.

During Holmes’ 18-year presidency (1949 – 1967), Northern enrollment grew from 2,000 to 18,000 students, and 29 new buildings were added. The introduction of advanced degrees at the masters and doctoral levels promoted Northern to university status during Holmes tenure. And among the accomplishments that gave scientist and outdoorsman Leslie Holmes the greatest satisfaction was the acquisition in 1951 of the 66-acre Lorado Taft Field Campus for outdoor education.

Holmes retired from NIU in 1967. While he intended to split his time between DeKalb and his summer home in Wisconsin, he ultimately accepted an offer to teach geography as a visiting professor at Arizona State University. Holmes died in Tempe, Arizona in August 1974, just three months after the governing board voted to name the Student Center after him.