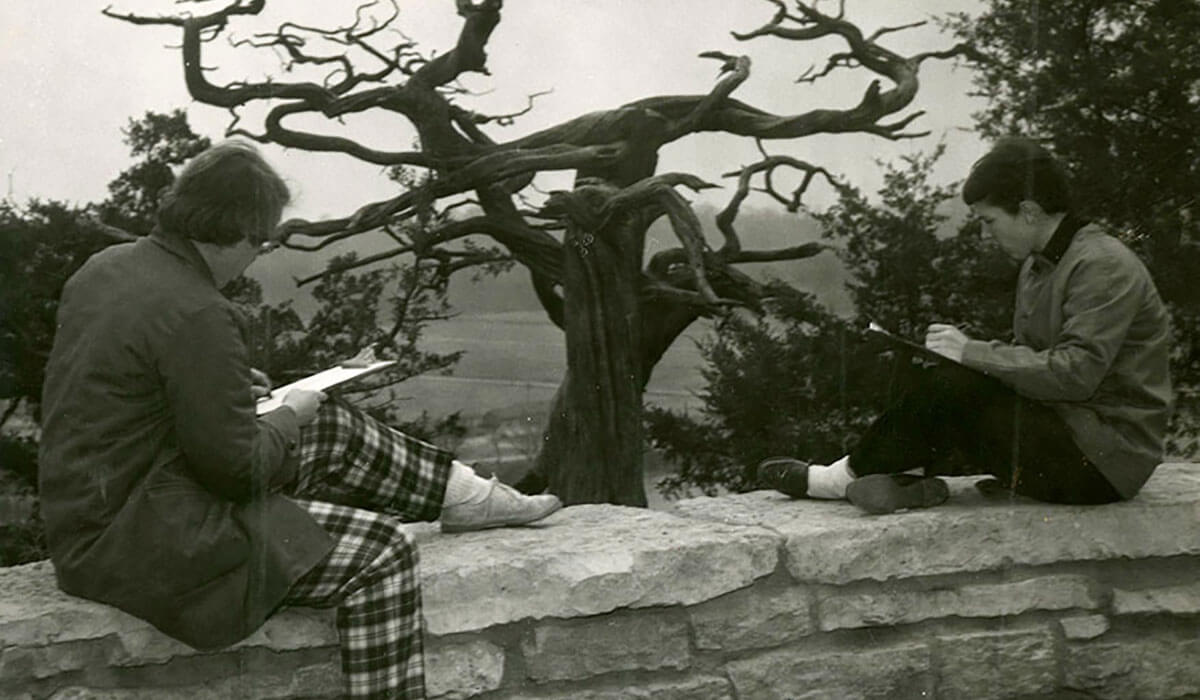 Outdoor Education students make notes on the sprawling tree that inspired the name "Eagles Nest" Artist Colony. When Lorado Taft and his fellow artists first established the camp, a family of eagles lived in the tree and inspired many drawings, paintings and poetry.

During the summer of 1898, noted American sculptor Lorado Taft and a small group of artists, architects and scholars established a summer retreat on the estate of a wealthy Chicago arts patron as a place to work, exchange ideas and social in peaceful isolation away from the city.

Located on a scenic bluff overlooking the Rock River, this enclave became known as the Eagle’s Nest Art Colony, and it flourished until the death of its last original member in 1942.

Almost immediately upon his arrival at Northern, President Leslie Holmes began lobbying the legislature to acquire the property. Holmes was an avid outdoorsman himself, and he believed strongly in the value of outdoor education.

In 1951, Northern acquired a portion of the estate including heavily wooded areas, open fields, ravines and the site of the original art colony to establish the Lorado Taft Field Campus. Initially it offered Northern students exposure to outdoor teaching methods; later, the College of Education developed a Master’s degree in Outdoor Teacher Education. Over time public schools in the region were given the opportunity to bring children to Lorado Taft, and the campus evolved into the outdoor education and conference center it is today.

The Taft campus has expanded from the original 66 acres to 141 acres with team courses, campfire rings and other outdoor gathering areas, sports fields and hiking trails through wooded and open areas and over a variety of terrain. The 15 buildings include a science lab, dining hall, dormitories, classrooms, meeting and conference rooms, staff residences and offices, and a maintenance shop.

Three buildings date back to the early days of the art colony and are more than 100 years old. Several sculptures by Lorado Taft remain on the grounds, and Taft’s 60-foot tall sculpture of the Eternal Indian (popularly if incorrectly known as Blackhawk) overlooks the Rock River a few hundred feet from the campus in adjacent Lowden State Park. Today, the Taft campus provides resident outdoor education programs to more than 6,000 elementary and middle-school students each year, as well as dozens of outside groups seeking a pastoral setting for conferences, workshops and retreats.