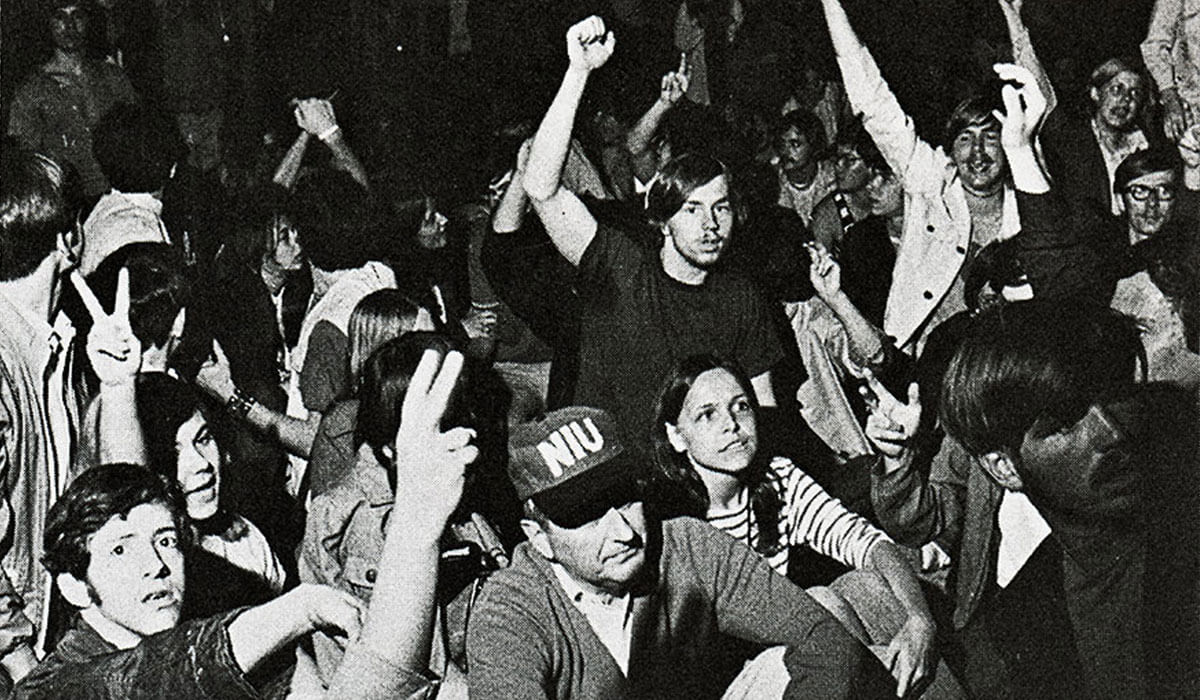 Tensions were at a boiling point by midnight on May 19 as more than a thousand student protesters blocked the Kishwaukee Bridge on Lincoln Highway. President Smith tried to convince them to move, but when that failed, he simply sat down with them and talked. While the incident ended in some arrests, many believe Smith defused a situation that could easily have escalated into something much worse.

At 12:24 p.m. on Monday, May 4, 1970, a warm spring day in Kent, Ohio, National Guardsmen fired into a crowd of unarmed Kent State students protesting the Vietnam War, killing four and wounding nine others. News of the massacre triggered riots and marches on college campuses across the nation, including at NIU.

NIU in the 1960s and 70s had a strong base of student activists who were intensely and personally engaged in anti-war and civil rights movements. Just three days before news  of Kent State, they had learned of the war’s new expansion into Cambodia. With news of the Ohio campus shooting, activists gained thousands of new converts.

On Tuesday, violence broke out with scattered vandalism in campus buildings. That night, the crowd grew huge and converged on downtown DeKalb. Windows were broken in more than a dozen buildings. More than 100 police dispersed the crowd, and 37 people were arrested.

The next day, President Rhoten Smith announced a moratorium on classes for Thursday and Friday, urging students to use that time for “meditation, reflection, and self-examination.” Indeed, that night a massive peaceful march took place with no violence. More than 8,000 converged on the central campus, and neighbors blocks away could hear their chants.

But in the days ahead, things did not remain peaceful.

On May 14, news reports once again told of protesting students shot to death, this time two from Jackson State College in Mississippi. Smith ordered another two-day moratorium on classes. During that moratorium, students began a peaceful march on May 18, initially attracting about 1,500 marchers. But the group grew and changed as the night wore on, until at midnight they sat down and blocked the Kishwaukee Bridge at Lincoln Highway.

Police were assembled and ready to deal with the crowd. At midnight, Rhoten Smith appeared and attempted to reason with the students, saying that they were blocking a federal highway and this wouldn’t end well. When his words went unheeded, Smith simply sat down with the students and waited, an uneasy peace occasioned by his presence. By about 3 a.m., the mood had changed, and Smith was escorted out of the crowd just before police moved in.

Throughout that night, and the next, sporadic protests and rioting took place on campus, with windows broken, university vehicles burned, and a firebomb, quickly extinguished, set off in the old Still Gym. On May 20, after hearing the results of a vote that would allow ROTC to remain on campus, vandalism spilled over into the Village Shopping Center and to Williston Hall, where ROTC was housed.

And then it was over. The violence and vandalism ended as abruptly as it had begun.

Several months later, Smith and other university presidents were ordered to testify before a State Senate committee investigating the spate of violence at Illinois universities.

“The root cause of these campus disturbances is the Vietnam War,” Smith said. “Coupled with the very dramatic, symbolic event at Kent State which seemed to indicate to the students the length to which the ‘Establishment’ will go to cram this war down their throats.”

“When we talk about protecting our values, I would say that there are other values which must be defended with the same spirit of devotion that one brings to the maintenance of order. Among those values is the duty to protect the constitutional rights of those who wish to express legal dissent and protest.”

In his book The Management of Dissent, author Brian Clardy looks at responses to the post-Kent State protests at seven public universities in Illinois.

“Smith’s relaxed mental attitude toward dissenting views made him a hero among the student body,” Clardy wrote. “He had one key advantage that other presidents lacked: He was not viewed by the protestors as an enemy. In the end, he was able to prevent a larger confrontation, and the protests on the DeKalb campus were not as violent as those on other campuses.”

Rhoten Smith had another advantage – the gift of perspective.

When he was the age of the students with whom he sat, Smith was serving in the Army Air Corps during WWII, piloting a B-17 bomber in 35 missions over France and Germany. He had seen war up close, and understood better than most what the students were protesting.