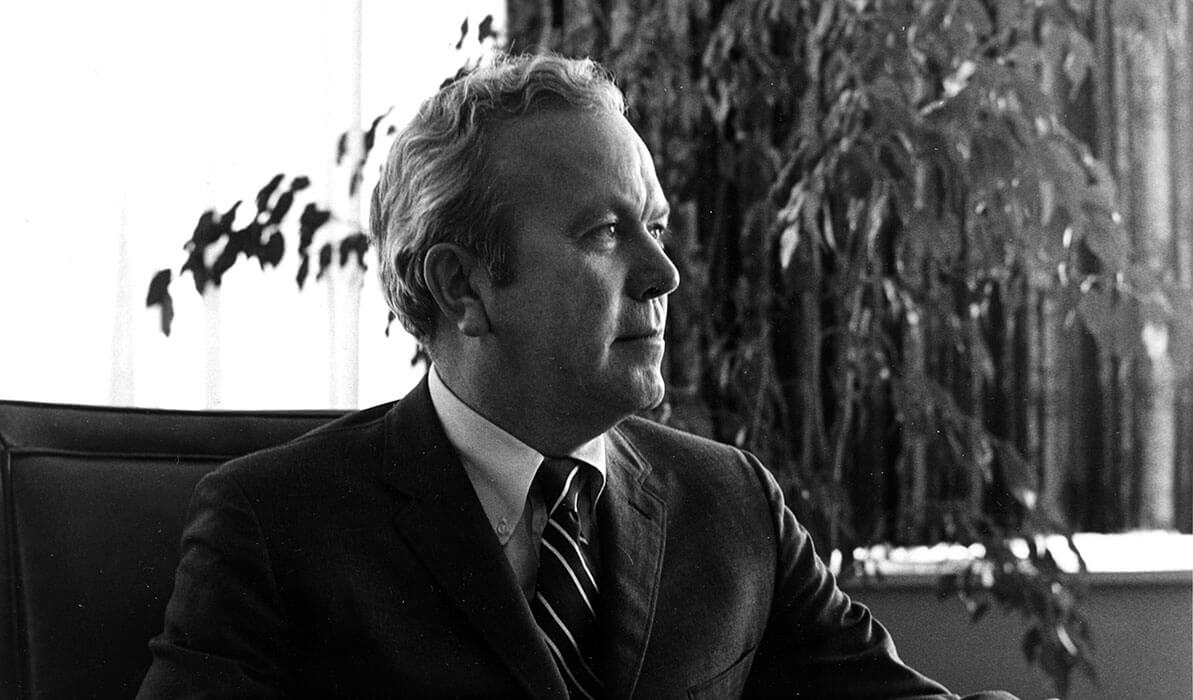 Richard J. Nelson is NIU's only president (to date) to come from a non-academic background. The lawyer and former executive with Chicago's Inland Steel Corporation had served on both the Illinois Board of Higher Education and the Board of Governors, and had deep roots in the state Democratic party as a former aide to Gov. Adlai Stevenson.

With the sudden resignation of Rhoten Smith in January of 1971, the Board of Regents was once again in search of an NIU president.

Following a national search with 360 applicants, the Board went with a familiar figure in Illinois public higher education – Richard J. Nelson, a former member of the Illinois Board of Higher Education and former Chair of the Board of Governors of State Colleges and Universities. In fact, Nelson had served on the search committee that recommended the appointment of Rhoten Smith.

Yet Nelson represented another break with the past. He had not been a faculty member nor an administrator. He was a lawyer, an active Democrat, a former assistant Illinois Attorney General, and an assistant to Governor Adlai Stevenson. When Stevenson ran for president, Nelson traveled with him as an advance man and speechwriter.  At the time of his appointment to the NIU presidency, Nelson was assistant vice president for public affairs at the Inland Steel Corporation in Chicago.

At the same time, Nelson brought to the NIU presidency many of the same values as his predecessor: He was known as a strong advocate of civil rights and fair employment practices. He had received awards from the Chicago Commission on Human Relations, the American Association of University Professors, and the American Civil Liberties Union for his efforts in the areas of civil liberties and academic freedom. And like Smith, Richard Nelson was a decorated WWII veteran, having served four years in North Africa and Europe with the First Infantry Division.

If Rhoten Smith had been plagued by campus unrest, Nelson was at the helm during a period of serious budget cuts, enrollment decline, and challenges to NIU’s mission as a comprehensive, doctoral-level university. He met those challenges with administrative reorganization and a strong defense of academic programs.

Just a month after taking office, Nelson and other Illinois presidents received a directive from the IBHE to submit (in 30 days) a list of possible academic program eliminations.

Nelson refused, responding instead that NIU would continue the process of academic planning begun under Rhoten Smith, and would not be submitting a “hit list.”

Instead, Nelson sought new efficiencies through programmatic and organizational change. He eliminated positions, reorganized all-university functions, and closed down the Laboratory School run by the College of Education.

At the same time, he focused one college on a creative arts core mission, renaming it the College of Visual and Performing Arts, and created a fifth college to oversee professional programs such as Nursing, Library Science, Home Economics and Industry and Technology (the College of Professional Studies). Into the latter college he added two new academic units: the Department of Communicative Disorders and the School of Allied Health Professions.

Another challenge Nelson inherited was the result of nearly two decades of non-stop building. Much of the campus expansion seemed to lack either the architectural or aesthetic qualities of deliberate and professional design. Nelson convinced the Board of Regents to contract with the Department of Architecture at the University of Illinois to prepare a campus environmental development plan.

The resulting study, directed by UI Professor William Fash, became known as the Fash Report and has been referenced in university development ever since. Among its most visible recommendations was the open-space mall between the Holmes Student Center and Founders Memorial Library; creation of the Recreation Center; and the planting of more than 3,700 trees and shrubs on the central and west campus.  During Nelson’s tenure, NIU also saw construction of the Psychology-Mathematics Building and the Music Building, as well as the opening of Founders Memorial Library. It also protected its boundaries with purchase of the Oderkirk property on Annie Glidden Road.

Toward the end of his presidency, Nelson became an outspoken advocate for an independent governing board. As one who had served on several higher education governing bodies, he maintained that a board overseeing multiple universities will tend to treat them all the same, stifling innovation. While Nelson’s vision was not realized until 1996, he was a compelling spokesman for the cause.

Nelson’s presidency came to an unexpected end when he was convicted of leaving the scene of a minor accident. On May 17, 1977, he was reported to have been driving on Sycamore Road when he allegedly sideswiped a bicyclist. A witness claimed that, while Nelson did stop to make sure the young woman was safe, he left the scene without calling police. For his part, Nelson adamantly denied involvement in the accident, but on January 25, 1978 he was found guilty by a Kane County jury, and the following day he resigned.

Nelson and his wife, Shirley, retired first to Ephraim, Wisconsin in Door County, and finally relocated back to Evanston, where they had lived before coming to NIU.  On May 13, 1994, Nelson died at the age of 78.  The story written by the NIU News Bureau upon his passing said that those who had worked closely with Richard Nelson would remember his “compassion, understanding, sensitivity, generosity and gentlemanly qualities.”