Home / Chapter 7: Courage and Confrontation / The College of Visual and Performing Arts is established (1973) 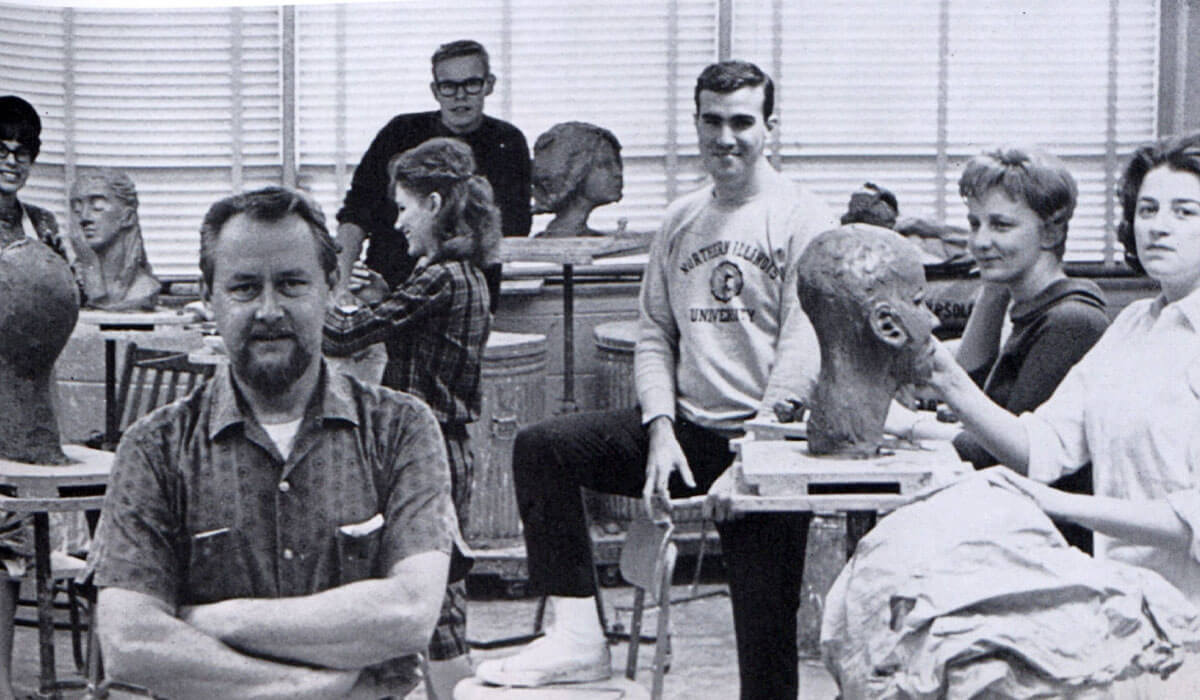 Art Professor William Haendel works with students in a sculpture class in 1965. Haendel was one of several faculty members in the early days of CVPA who made a name for NIU in the art world.

As early as 1899, Northern offered courses in drawing and music. The earliest yearbooks show robust student interest in the arts, and that interest persisted well past the half-century mark. In fact, the visual arts had grown to be the largest academic department on campus by the 1960s.

All of the arts had been housed in the Stevens Building on central campus, and they were bursting at the seams.  Art Professor Jack Arends led the persistent drumbeat for a new facility, and in 1971, the $3 million, 100,000-square-foot Visual Arts Building was dedicated. Within a few months, NIU broke ground for a new Music Building next door on the banks of the Kishwaukee River where old Glidden Field once stood.

At the same time, the Council of Academic Deans and the Academic Planning Committee were both recommending a more purposeful focus on “the creative arts.” Their proposal called for a new administrative structure that would combine the various fine arts into a single college, while creating a new administrative home for professional studies.

The arts had for some time been part of the now-defunct College of Fine and Applied Arts (CFAA), which in addition to Music, Art and Theatre, originally housed Home Economics, Industrial Arts and Business (the last of which became its own college in 1961).

In 1973, the vision of a focused arts portfolio was realized with the replacement of CFAA by the streamlined College of Visual and Performing Arts, composed of the departments of Art, Music and Theatre Arts.  Home Economics and Industrial Arts were transferred to a new College of Professional Studies.

Robert Buggert, who had been the dean of CFAA, was named the first dean of CVPA. He was himself a musician, and proceeded to build a nationally recognized music program. He also successfully petitioned to have the three departments be renamed “Schools,” consistent with national trends in the visual and performing arts.

Arends literally created then nurtured the Art program as it became one of the nation’s largest, and the Visual Arts Building was later named for him. Arends helped establish the NIU Art Gallery as well.

Richard Arnold provided early leadership in Theatre Arts, adding an impressive series of campus drama, dance and musical productions each year, as well as a summer theatre program in Chicago.

Stanley Ballinger presided over the design and construction of the Music Building, described as one of the nation’s most functional and attractive facilities of its kind.