Home / Chapter 7: Courage and Confrontation / The NIU Steelband is formed (1973) 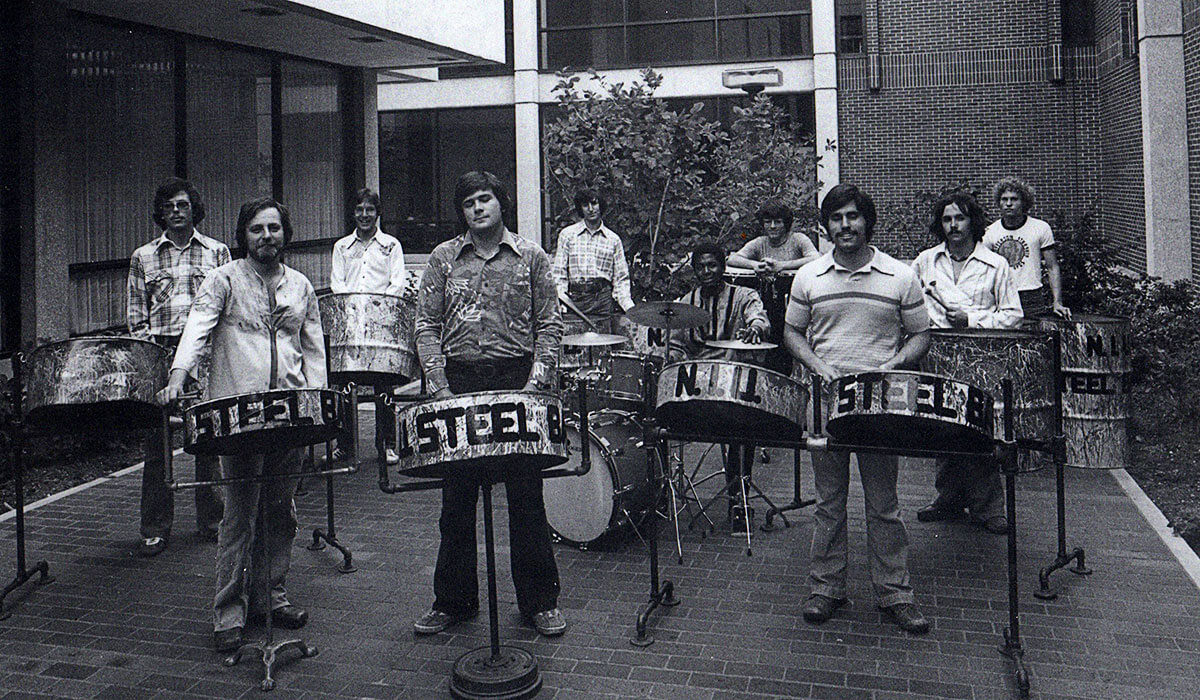 NIU created the nation's first collegiate steel pan band. Based on its success and popularity, steel bands have since proliferated at many other colleges and universities across the country.

When Al O’Connor was a graduate student at the University of Illinois at Urbana-Champaign, he got the chance to play around with an instrument unlike any he’d ever seen before. Made out of a 50-gallon steel oil drum, it had indentations hammered into the inverted bottom that formed notes when struck with a special hammer. It was a steelpan, the national instrument of Trinidad and Tobago.

The following year, on his honeymoon in the U.S. Virgin Islands, O’Connor heard a 16-piece steel band and was hooked. He bought one of the instruments, took it home and taught himself to play it.

Fast forward five years, and O’Connor is teaching music at NIU. He wants to form a steel band, but has no idea where to locate enough steel pans to do so. As luck would have it, one of his students came back from a trip to the Caribbean having located the instruments needed to form a band. Connections were made, and in 1973, the country’s first collegiate steel band came to life.

Then as now, the NIU Steelband regularly appeared in concert at public schools, universities, conventions and arts series, always delighting their audiences. While much of its repertoire celebrates the islands, the band has always experimented with ways to incorporate the steel pan into different genres, playing with symphony orchestras and other ensembles.

In 1985, O’Connor coaxed Cliff Alexis to DeKalb to build and tune steel pans and to help in arranging music and teaching the band. Eventually Alexis became co-director of the band and composed pieces for the group to perform.

While judging a 1989 high school steel pan competition in Trinidad, O’Connor and Alexis first heard Liam Teague, who later came to NIU to earn his bachelor’s and master’s degrees. Teague is considered one of the best and most accomplished steelpan performers in the world, and eventually became the director of the NIU Steelband and head of steelpan studies.

Now closing in on a 50-year history, the NIU Steelband has performed throughout the United States and across the globe. From concerts at public schools to a performance for 18,000 soccer fans at Yankee Stadium and two tours of Taiwan, the band is one of NIU’s most popular ambassadors. NIU is the only university in the U.S. that offers both a bachelor’s and a master’s degree in steelpan.