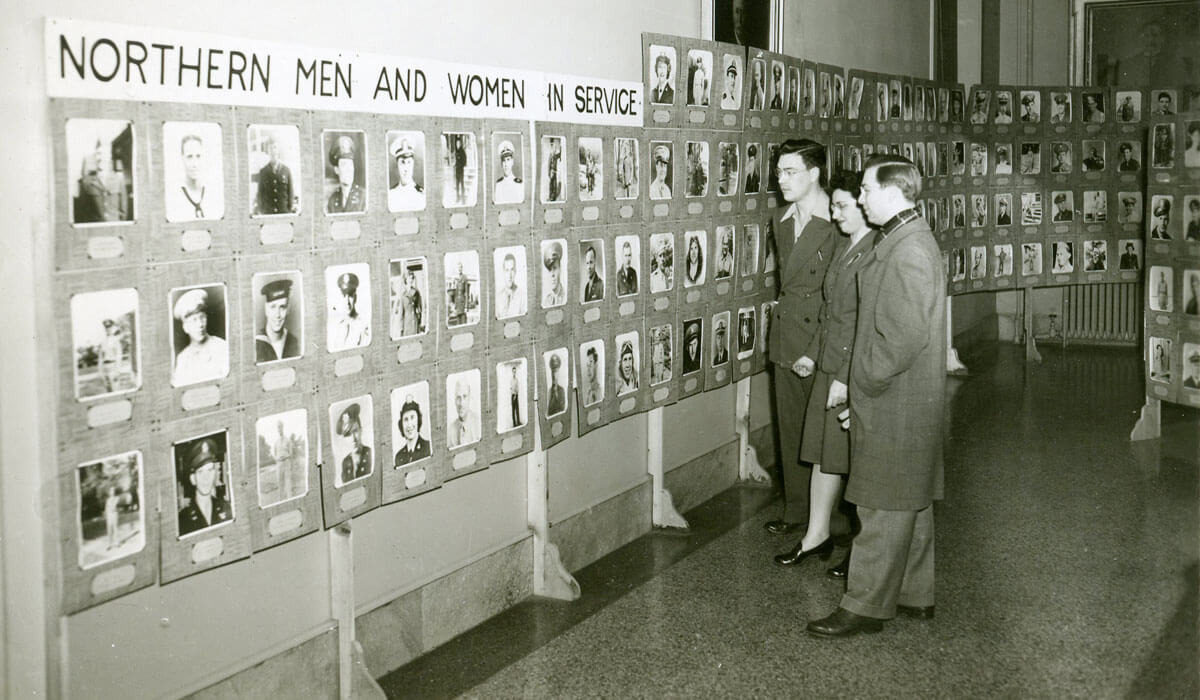 Throughout the war, NISTC honored Northern servicemen and women with a display in the Altgeld Hall foyer.

By the time the United States entered World War II in 1941, NISTC had just over 1,000 students – 370 men and 638 women. Over the next four years there was a constant exodus of students – both men and women – into the armed services, leaving a wartime student population of fewer than 500 students.

For those who stayed in DeKalb, the war loomed large. Students and faculty alike sold war bonds, went without food and material needed for the war effort, and sent packages to their friends overseas. Pictures of the NISTC service men and women were displayed in the main foyer of Altgeld Hall, and a Faculty Defense Council was established, along with a Civilian Morale Committee, to coordinate volunteer efforts.

The number of volunteer war effort activities undertaken by NISTC faculty and students was impressive:

In addition, NISTC ran a civilian pilot-training program under the direction of the Civil Aeronautics Administration, and was granted permission by the U.S. Navy to offer a special program that qualified young men for commission as officers.

But perhaps the greatest impact of WWII on Northern’s people and programs came after the war ended, and college campuses like NISTC were flooded with returning veterans. In 1946, enrollment jumped to 901 men and 541 women – the first time that men outnumbered women at Northern. Of those numbers, 731 men and 11 women – more than 50 percent of the student body – were veterans.

The most immediate result of this student influx was a shortage of places for them to live. With the first men’s dormitory (Gilbert Hall) still several years away, veterans and faculty joined forces to find space for students to live in DeKalb. One of their more successful techniques was attaching tags that asked about use of spaces like attics and basements to milk bottles delivered to DeKalb homes. Those who did not find living quarters in city homes were forced to sleep on cots and bunk beds in campus spaces such as the Still Hall gymnasium.

In the end, relief came in the form of surplus army barracks released from Fort McCoy in Wisconsin. Nineteen such structures were set up on land at the corner of Lucinda Avenue and Garden Road, and soon a cafeteria joined the barracks. The entire area became known as “Vetville,” and it was the social center of campus for many years. Several of the Vetville structures remained standing for nearly 40 years, with the last one being torn down in the 1980s. Some 400,000 Americans died in World War Two. Thirty-seven of those who made the ultimate sacrifice were students from Northern Illinois State Teachers College.