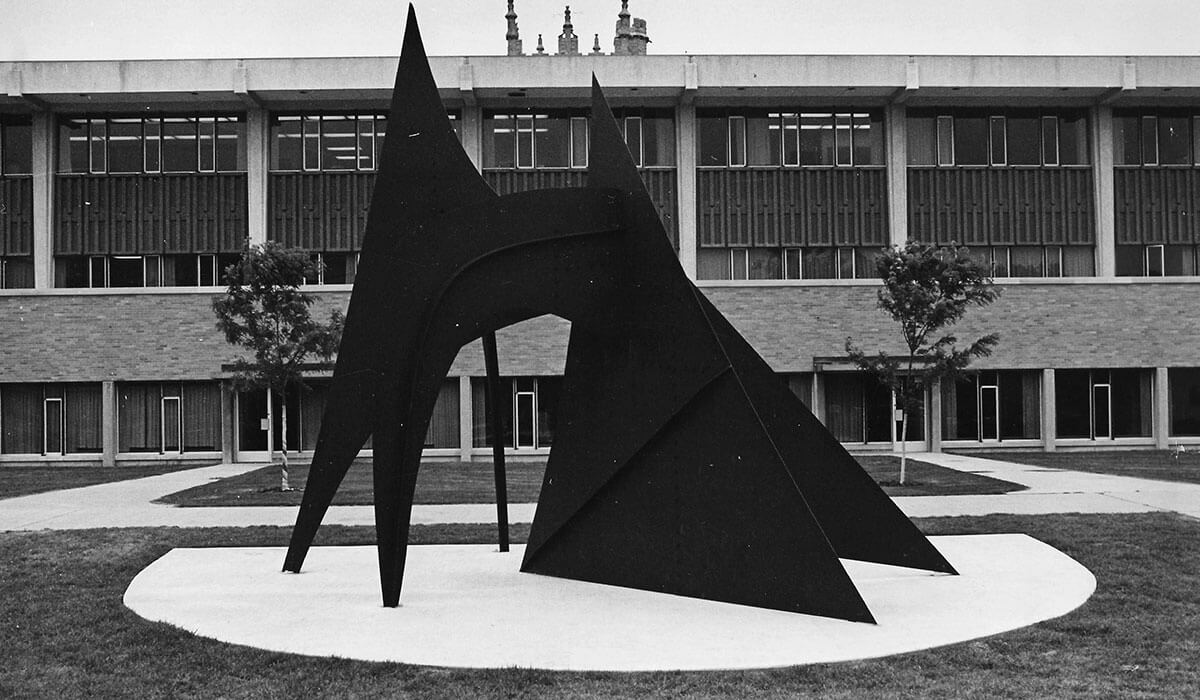 The New University called for by President Rhoten Smith would celebrate the life of the mind in all its many expressions. In the run-up to Smith’s inauguration, planners empaneled a committee of experts to identify a piece of public art that would symbolize NIU’s evolving aspirations.

In the 1960s, Alexander Calder was arguably America’s foremost sculptor, and one of the best-known artists in the world. He was the inventor of the mobile, a type of kinetic sculpture that delicately balanced suspended components that moved in response to air currents. He also created stationary sculptures called stabiles, or large-scale fixed versions of the mobiles. These monumental abstract sculptures were installed in urban spaces around the world, including the huge red-painted stabile called Flamingo in the Federal Center Plaza in Chicago.

Le Baron, a contemporary nickel steel-plate stabile sixteen feet high and fourteen feet wide, was first displayed at the Maison de la Culture in Bourges, France. It was deconstructed there, shipped to DeKalb, and then reassembled atop a special concrete pad on the pedestrian quad between Lowden, Davis and Montgomery Halls and the East Lagoon. Calder himself chose the location after studying maps and photos of the campus.

The sculpture was purchased for $50,000 (the equivalent of nearly $370,000 today), and is now valued at more than a million dollars. It was paid for by donors, the Student Association, and a loan from the NIU Foundation (repaid by revenue from campus vending machines).

Le Baron was dedicated on May 23, 1967, as part of the weeklong celebration of NIU’s new president.