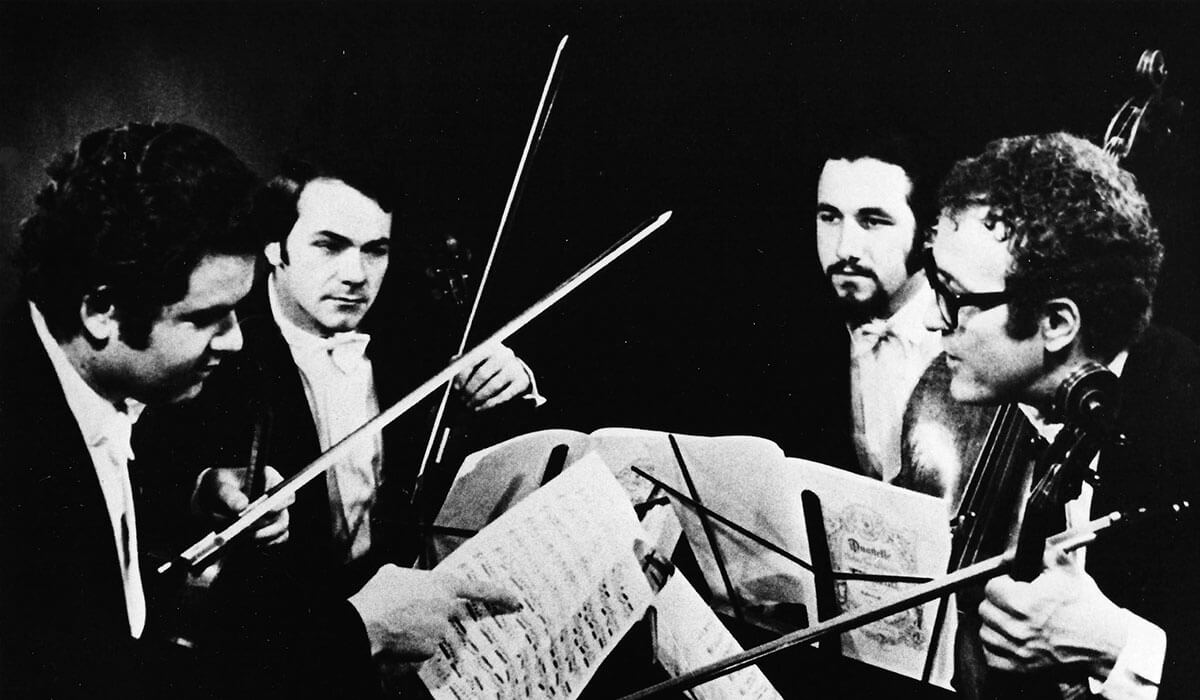 The Vermeer Quartet was NIU's resident string quartet for 38 years. They earned 3 Grammy nominations for recordings of their work, and trained many of the most gifted young string ensembles performing today.

NIU’s progression toward excellence in music was slow to take off in the 1940s and 50s. Most students were not from homes and schools where musical opportunities were afforded, and few scholarships were available to attract gifted musicians.

That began to change in the 1960s, as the university stepped up efforts to attract more accomplished music faculty, and in turn, more gifted students. By the end of the decade, NIU pursued another route toward musical prestige by recruiting its first resident faculty ensemble – a string quartet called The Vermeer.

With performances in practically every major city in North and South America, Europe, the Far East and Australia, the Vermeer Quartet had achieved international stature as one of the world’s finest ensembles. They performed at virtually all of the most prestigious festivals, and received three Grammy nominations for their recorded performances of the six Bartok quartets, the Shostakovich and Schnittke quintets, and Haydn’s Seven Last Words of Christ.

Lead violinist Schmuel Ashkenasi was the driving force behind the Vermeer at its inception, and stayed with the group up until its retirement in 2007. Other members came and went, but for the longest period of its existence, the other parts were played by Mathias Tacke on second violin, Richard Young on viola, and Marc Johnson on cello. Previous members included Pierre Menard (second violin); Scott Nikrenz, Nobuko Imai, Jerry Horner and Bernard Zaslab (viola); and Richard Sher (cello).

The Vermeer’s extensive performance schedule in Europe helped recruit young musicians at a new level of excellence. Over the years, the Vermeer trained some of the most gifted young ensembles performing today, including the Shanghai, Enso, Pacifica  and Arianna string quartets – as well as NIU’s current resident faculty ensemble, the Avalon String Quartet.

Classical music critics from around the globe heaped praise on the Vermeer, using words such as “magnificent,” “technically without flaw,” and “utterly persuasive.”

“Out of this alchemy,” wrote a Swedish critic, “is born a thing of beauty which one can define, without hesitation, as perfection.”