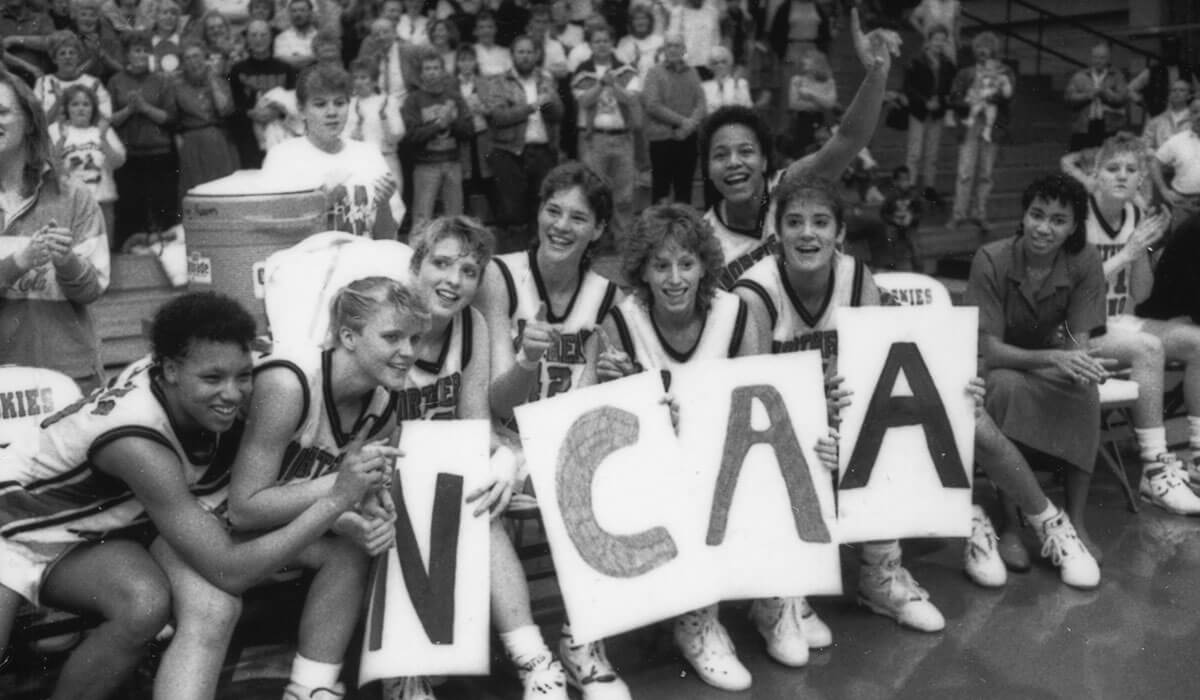 On February 15, 1990, a rematch between the Huskies and the DePaul Blue Demons drew a standing-room only crowd of 6,118 - the largest ever for a women's basketball game at the time. On March 10, Coach Albright and her crew beat DePaul again for a trip to the NCAA's Big Dance.

A quote from then junior Hall of Fame point guard Denise Dove in 1989-90 summed up the era:  “We were on a mission from the beginning.”

It was a blur of Huskie achievement, those 11 years under head coach Jane Albright and Liz Galloway-McQuitter (1984-95).

The ultra-loyal Chick Evans Field House “Hoop Troopers” talked in their own language— with “C.O.”, “Double D”, “Light ‘Em Up Lisa”, “Charmo”, “Coach A” nicknames, all informal tributes to those NIU individuals and their aggressive style of play that created this gung-ho fan culture.  How better to share a Northern Illinois game—win or lose—by the players and coaching staff navigating “The Ring”—with fans lining four sides of the court in post-game, getting a hug, a handshake, or a high five.  It was the ritual in Evans.

The best quintet of these 11?  By consensus of the NIU Athletics Hall of Fame Selection Committee, Albright’s 1989-90 group was enshrined in 2005 and rightfully so.  It was the first women’s Huskie basketball NCAA team with a school-record 26 triumphs in 31 outings, the No. 17 final AP ranking, and the nation’s No. 1 offense (94.5 ppg. average with eight games over 100 points—including a record 122 vs. Valparaiso—and 11 more efforts with 90 or more).  Four of the five 1989-90 starters—Dove, guard Lisa Foss, forward Tammy Hinchee, and center Carol Owens—eventually made the Northern Illinois Hall of Fame as individuals.

On February 15, 1990, the NIU-DU rematch at Evans drew a standing room only crowd of 6,118—the largest to see a women’s college game in the state at the time and biggest announced basketball crowd—male or female—ever at Evans.  As host of the NSC tourney on March 10, Albright and company beat DePaul again for the ticket to NCAA’s Big Dance and the Midwest Regional opposite No. 5 seed Texas Tech.

With a combined 70 points from the four aforementioned NIU Hall of Famers, the Huskies upset TTU (84-63) before an impressive spring break crowd in Evans of 5,417 spectators on March 14.  Next was Purdue.  In a back and forth contest with 19 ties and 26 lead changes, the Boilermakers prevailed (86-81) on March 18 at Mackey Arena.

After the 1993-94 season, Albright was lured away by Wisconsin of the Big Ten and replaced by Galloway-McQuitter who kept the post-season string alive at six by beating UW-Green Bay, Notre Dame, and LaSalle in OT (80-77) for the MCC tourney crown on NIU’s home floor to capture the NCAA bid vs. Vanderbilt in 1994-95.