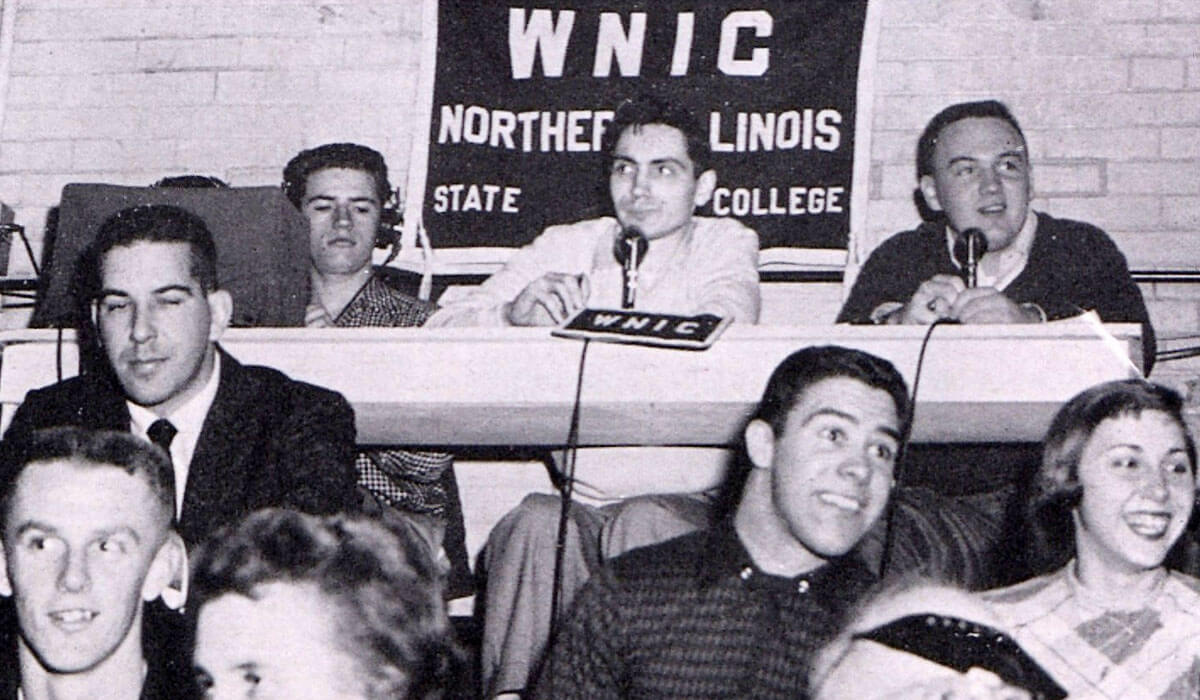 Student broadcasts of NIU basketball games were among the most popular features of early NIU public radio.

Thousands of listeners throughout northern Illinois and southern Wisconsin get their daily public radio fix compliments of NIU and its NPR stations, WNIJ (89.5-FM) and  classical WNIU (90.5-FM). Operating out of modern studios and including “repeater” stations throughout the region, today’s Northern Public Radio enterprise bears little resemblance to its beginnings in a tiny 10-watt station with a tower tucked behind Jimmie’s Tea House on College Avenue.

NPR’s DeKalb history began in 1954, with a small station operating under the call letters WNIC, and broadcasting just a few hours a day with announcements of campus events, lectures and music. A decade later, in 1964, the station’s broadcasting power was increased to 2,500 watts, covering DeKalb, Sycamore and most of DeKalb County.  Programming evolved as well, focusing more on music and local news.

In 1967, President Lyndon B. Johnson signed a law setting up public broadcasting in the U.S. and establishing the Corporation for Public Broadcasting.  CPB ensures access to non-commercial content, and distributes funding to nearly 1,500 locally owned public radio and television stations.

By 1974, WNIU was given authority to raise its power to 50,000 watts. Classical music and jazz were programming staples, along with NPR’s “All Things Considered”, and reception now extended to Rockford.  Five years later the station’s audience expanded again with the addition of the Northern Illinois Radio Information Service (NIRIS), which provides reading of daily newspapers, magazines, books and other materials for people with visual and print-reading impairments. Reception for all audience members improved dramatically in 1988, when the station’s transmitting tower was moved to suburban Lindenwood.

WNIJ signed on the air in 1991, and programming was split between two distinct services: WNIU adopted an all-classical-music format, while WNIJ provided news, jazz and entertainment. The whole operation received another boost that year when it moved into its current space, the Northern Broadcast Center, at 801 North First Street in DeKalb. At the same time, much of the NIRIS operation moved to Riverfront Museum Park in Rockford.

Northern Public Radio as we know it today came to be in the mid-1990s, when WNIJ and WNIU swapped frequencies. WNIJ became a news-talk station while WNIU continued its classical music direction. Around the same time, NPR received a federal grant to build “repeater stations” in areas previously unserved by public radio: LaSalle, Sterling and Freeport.

Today Northern Public Radio is a major connection between NIU and its region. Locally produced content includes “Sessions from Studio A”, which introduces listeners to local and regional musicians; “Perspectives”, a daily opinion piece voiced by area listeners; podcasts on a variety of topics; and local news coverage. Nationally-produced programs also inform and entertain, including the venerable “All Things Considered”, “Wait, Wait – Don’t Tell Me!”, and “Morning Edition.”

On Classical 90.5, listeners hear programming unavailable anywhere else, including broadcasts from the Metropolitan Opera, Carnegie Hall, and the great symphonies of New York, Chicago and San Francisco. From humble beginnings in a small campus studio to a five-station network reaching more than 100,000 listeners each week throughout northern Illinois and southern Wisconsin, Northern Public Radio continues to inform and entertain in a new century, where generous donors help support the station where they “learn something new, every day.”