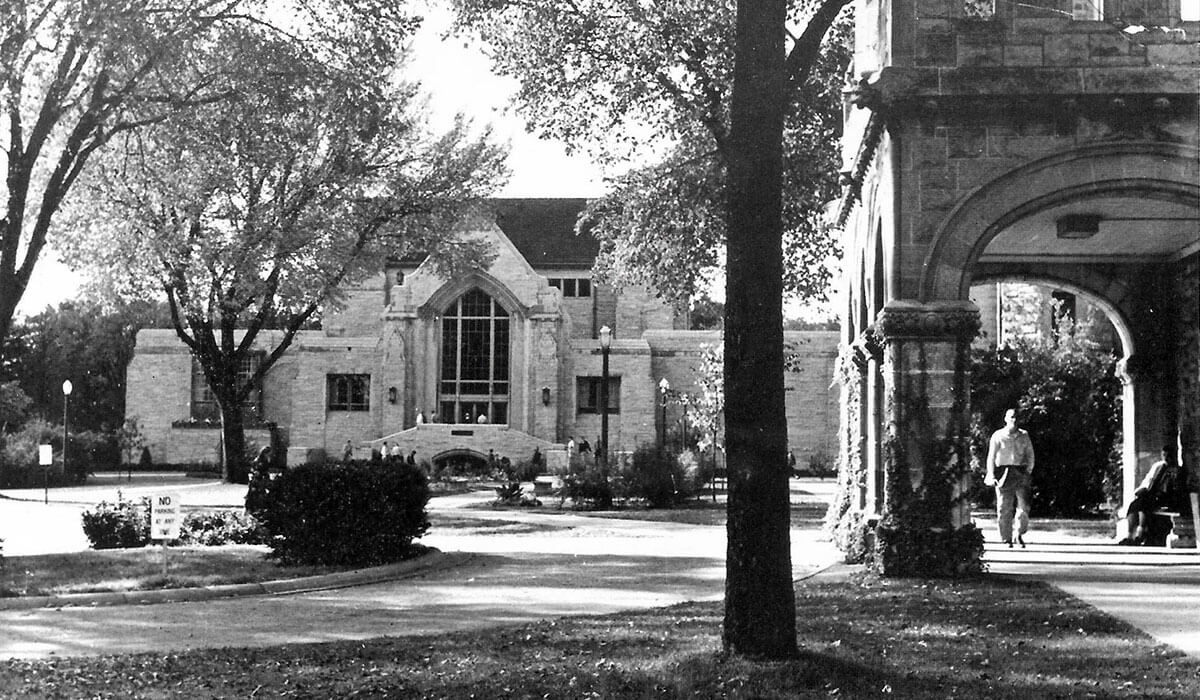 The Swen Parson Library was designed to be beautiful as well as functional, with leaded glass windows and an impressive vaulted entrance.

In the long story of Northern’s growth into a major public university, the development of its Libraries plays a key role.

By the early 1950s, NISTC had successfully lobbied to create a Graduate School – but with the caveat that its library holdings be greatly expanded. The existing Haisch Library on the second floor of Altgeld Hall was clearly not sufficient in the booming post-war era, and plans were made for a new library befitting of NISTC’s new stature.

Set halfway between Adams Hall on the north end and Davis Hall on the south, Swen Franklin Parson Library featured a soaring vaulted entrance, leaded glass windows and a Gothic architectural style that evoked the great academic libraries of Europe.  Perhaps more importantly, it offered space for 150,000 volumes – nearly twice as many as the old facility.

On December 8, 1952, in one of the most memorable events of Northern’s history, hundreds of faculty, staff and students formed a human conveyer to move 83,000 books (estimated weight: 85 tons) into their new home. President Leslie Holmes led the brigade, and members of The Dames Club set up refreshment stands with coffee and donuts for the volunteers.

The new library quickly became the center of student life. In addition to the expanded collection and larger facilities, Swen Parson Library housed an art gallery, a music room, a radio broadcast booth and a state-of-the-art lecture hall.

The size and grandiosity of the building that bears his name would likely have amazed Swen Franklin Parson himself. As a 14-year-old immigrant from Sweden, Parson arrived in America with little formal education and no command of the English language. Determined to succeed, he had to start school alongside small children until he could catch up. Eventually he did so, earning a degree at Illinois State Normal and teaching mathematics in the DeKalb public schools. President John Williston Cook hired Parson as one of the original members of his NISNS faculty, and he soon became a much-loved and respected member of the Northern family. So well-thought of was Parson that when President J. Clifton Brown abruptly resigned in 1929, Parson was briefly named acting president.

Swen Parson Hall now houses the NIU College of Law and other administrative offices, but for 25 years it served as the intellectual heart of a university growing in both size and stature.