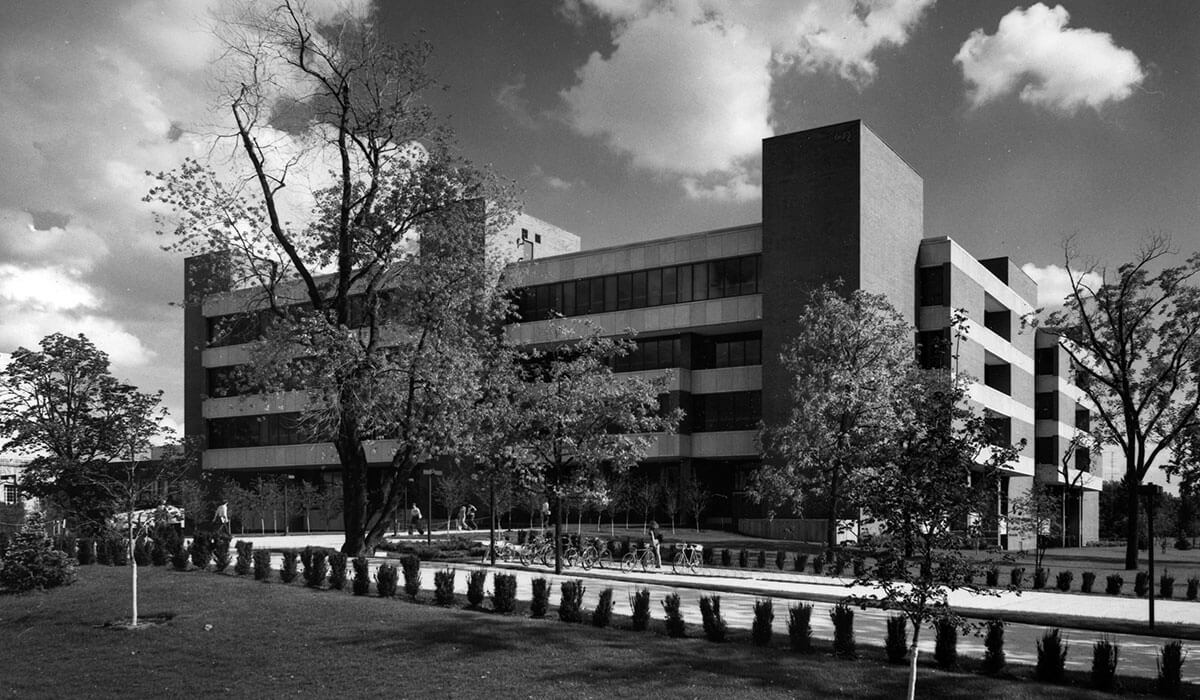 Founders Memorial Library is named for the four DeKalb residents who used their influence and wealth to bring NIU to DeKalb: Isaac Ellwood, Joseph Glidden, Jacob Haish and Clinton Rosette. It opened its doors on January 10, 1977.

At the heart of a university’s teaching and research mission is its library.

At Northern, that heart beat for its first fifty years on the second floor of Altgeld Hall in a facility named for its benefactor, barbed wire baron Jacob Haish. By mid-century, it was bursting at the seams with 85,000 volumes and a growing post-war student body.

The answer came in a new building across from Altgeld:  Swen Parson Library, with its vaulted entrance, leaded glass windows and space for 150,000 volumes to accommodate an enrollment of 2,500. It proved adequate for only a few years, even with the addition of two new wings that doubled the building’s size.

Before the building was complete, it had a name.

At the conclusion of the university’s 75th anniversary celebration in 1974, NIU renamed *11 existing campus buildings and honored the four DeKalb residents who brought NIU to the area by naming the new central library Founders Memorial Library. Isaac Ellwood, Joseph Glidden, Jacob Haish and Clinton Rosette used their influence and wealth to get Northern located in DeKalb, and they are remembered today at the heart of campus.

Designed by the firm of Hellmuth, Obata, and Kassabaum, the building cost $13.5 million and took four years to construct. It was the largest single project ever undertaken on the campus at that time, with five stories, nearly 300,000 square feet and seating for nearly 1,800 students.

Recognizing recent growth in the student population and predictions for more growth in the foreseeable future, Walton had pressed for flexibility in design. The architect responded by designing the facility in 24 x 27 modules around supporting columns with large areas left open so that partitions and equipment could be shifted with minimal remodeling.

Seating in the new library would be about two-thirds in study carrels with the rest informal study areas and tables.  The main entrance would be directly across from the front door of the Holmes Student Center, and a sunken courtyard would allow light into the lowest levels and provide many landscaping options.

“Although the collection and departments are dispersed on several floors,” read a news release from the period, “users will have speedy access to all floors by means of automatic elevators and escalators, which have a capacity of 5,000 persons per hour.”

In addition to its modern conveniences, the new library would house a critically needed repository for regional and university history. In 1976, History Department Chair J. Carroll Moody and Clyde Walton, director of University Libraries, developed a successful grant proposal to the National Endowment for the Humanities to establish and fund a Regional History Center/University Archives at NIU. In 1978 the first two-year grant of $200,000 established the Center, with a second grant arriving the following year.

Founders Memorial Library opened its doors on January 10, 1977. Among its first guests were members of the NIU Alumni Association Board, there to present a check for a special collection to help build the regional history collection.

As the library’s 25th anniversary arrived in 2002, a $4 million expansion opened the basement of the building for compact shelving storage of low-use items. By then, the library held 1.8 million print volumes, more than a million microforms, thousands of serial runs and more than 300 computers. In 2004, the library passed the 2 million mark in total volumes held.