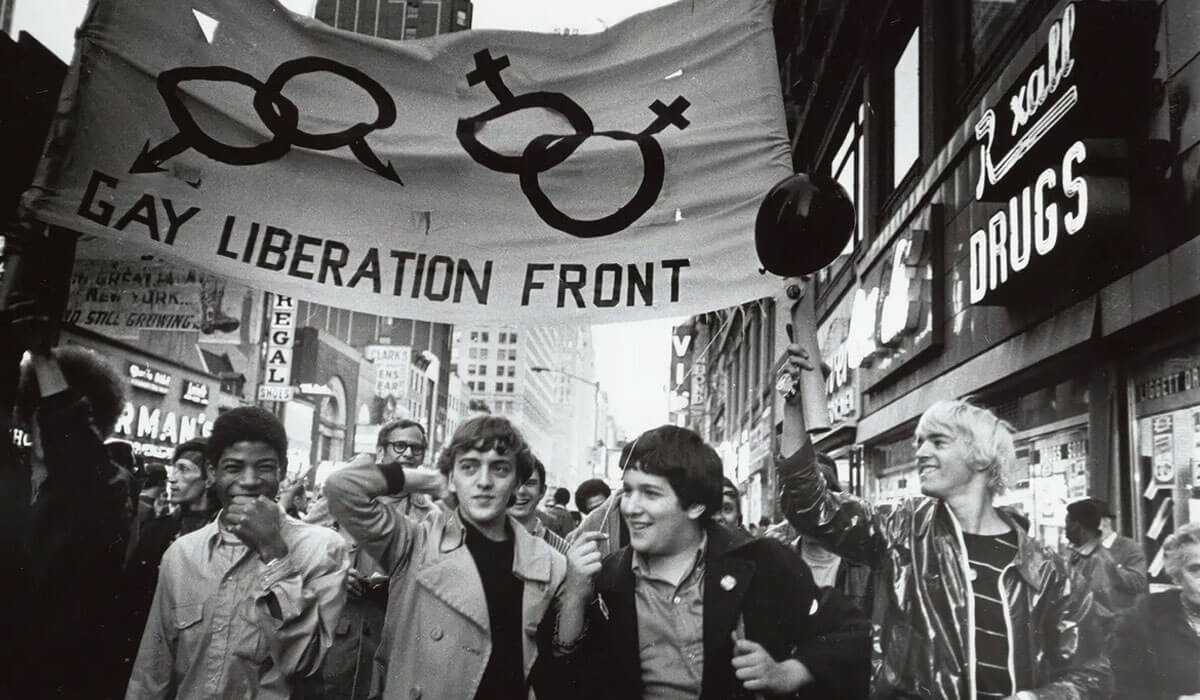 The Gay Liberation Front was a national organization with many state- and community-based chapters. They often sponsored marches, such as this one in Boston in 1970, to raise public awareness. NIU's GLF chapter was started by students who attended organizing meetings in Chicago, then took what they learned back to DeKalb. In time, non-student community members from DeKalb and surrounding communities also joined NIU's GLF, as it was the only gay organization for many miles around.

In the early morning hours of June 28, 1969, New York City police raided the Stonewall Inn, a gay club located in Greenwich Village. The raid sparked a riot and six days of protest and violent clashes. The Stonewall riots served as a catalyst for the gay rights movement nationwide, including at NIU.

“We knew in our hearts we were right on,” they wrote in A Concise History of Gay Liberation at Northern Illinois University, “but did we have the guts to do it in the big “D”? Long hours were spent in our lavender living rooms, hoping, talking, and yes, praying for strength.”

Strength prevailed. First they attempted to place an ad in the Northern Star. It was rejected. Instead, they began distributing fliers announcing that gay liberation had arrived at Northern, and inviting interested parties to attend meetings of the NIU Gay Liberation Front (GLF). The GLF sponsored events, kept phone trees, provided peer counseling, and created the first public gay community in DeKalb. Their numbers increased over time, including both men and women, as well as non-student community members.

“We grew strong and powerful and influential,” the organizers wrote. “We learned how to run an organization. All the dragons, it turned out, were in our heads.”

On April 12, 1970, the GLF was recognized by the Student Association as an official student organization. They established a speaker’s bureau, appeared on radio interview programs, talked to classes, spoke at anti-war rallies and generally raised the public profile of NIU’s gay community.

Yet acceptance was hard-won. The Student Association continually refused to fund GLF in any meaningful way, and would not support the organization’s request for on-campus office space. “I don’t like funding a dating service for guys,” one SA Senator famously said.

Undaunted, the GLF held ticketed dances and other fundraising events, raising the $30 per month needed to rent an office in downtown DeKalb. They remained in rented space until the fall of 1979, when they were finally approved for an on-campus office.

Over the years, NIU’s official gay student organization underwent several changes, including different names. The GLF became the Gay Community Organization (GCO) in 1974, and then the Gay/Lesbian Union (G/LU) in 1980. In 1993, it became the Lesbian, Gay, Bisexual Coalition, and finally took the current name, PRISM, in 1998.

On November 21, 1986, the NIU Student Association amended its constitution to prohibit discrimination based on sexual orientation. In the spring of 1988, the university followed suit, revising its constitution to similarly protect LGBTQ+ students, faculty and staff, and established a Presidential Commission on Sexual Orientation.

NIU established an LGBT Resource Center in 2003, finally realizing the GLF’s dream of having a large, established space for gay and lesbian students on campus.

By 2006, NIU was named one of the most gay-friendly campuses in the country by The Advocate College Guide for LGBT Students.

In 1996, NIU established the Eychaner Award for most outstanding contributions to the LGBT community. Among its first recipients were four alumni – Carl, Guy, Steve and Dennis – who faced their fears and created a movement at NIU that this year celebrates its 50th anniversary.