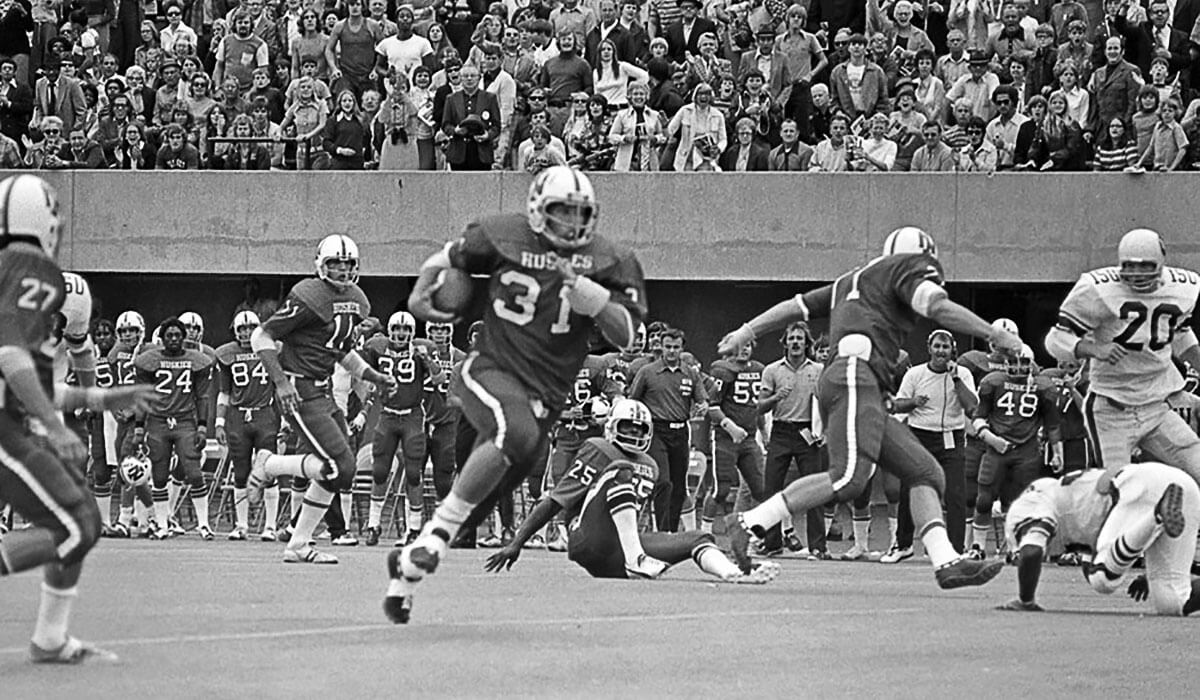 By the 1960s, NIU had gained full-fledged university status. The booming enrollment, mushrooming campus infrastructure, and athletic success at the College Division level all led to thoughts of competing in the University Division.

Without it, there’s no Northern Illinois University appearance at the 2013 Orange Bowl, no trip to the 1983 California Bowl, or no National Collegiate Athletic Association team or individual berths in any sport.

It?  The major-college ranks. At one time called NCAA University Division.  Then Division I.  Now, in one sport, the Football Bowl Subdivision.  Whatever the nomenclature, the elite level of American intercollegiate athletics.

Some long-time observers opine that this might be the most significant NIU athletics achievement over the last half century.

In essence, the NIU men competed at the College Division level for nearly seven decades, although the term did not come into official NCAA use until 1956.  The Huskies also participated under the auspices of the National Association of Intercollegiate Athletics.  By any perspective, the impetus for program-wide major-college status began with football, but chronologically, that’s not exactly what happened.

The architect of this transition was long-time NIU athletics director George “Chick” Evans, the patriarch of the men’s program known for his lengthy tenure (1929-68), tenacity, versatility (Evans served as head coach in eight Huskie sports—including football and men’s basketball), and ultimately, his vision of NIU’s future.

By the 1960s, NIU had gained full-fledged university academic status the previous decade (1957). The booming enrollment, mushrooming campus infrastructure, and the athletics success at the College Division level all led to thoughts of competing in the University Division.  Not only did Evans have his eye on NCAA D-1 status, but affiliation with the Mid-American Conference as well.  After the undefeated football Huskies won the College Division National Championship via the Associated Press and NAIA polls in 1963, Evans recognized that future league contemporaries Bowling Green State and Ohio had done the same in 1959 and 1960, respectively, and then ascended to the next level.

As more MAC schools dotted the Huskie schedules, Northern Illinois withdrew from the Interstate Intercollegiate Athletic Conference effective at the end of the 1965-66 academic year.  The association with the IIAC dated back to its Little 19 Conference precursor in 1922.  In the interim, the plan was for NIU to compete as a major NCAA independent until negotiating MAC membership.

For 1967-68, NIU declared itself NCAA University Division in all 11 men’s sports (football, basketball, cross-country, track and field, soccer, wrestling, swimming and diving, gymnastics, baseball, golf, and tennis).  To this day, there is debate whether Huskie men’s hoops made D-I by self-acclimation or by vote of the U.S. Basketball Writers Association.  Either way, 1967-68 is the documented starting point for 10 of those 11 sports, sans football.

There was one problem.  Although Evans informed members of the Football Writers Association of America and other media outlets about the Huskie intentions, the NCAA started re-examining its criteria for University Division status.  It was determined that both the 10-game 1967 and 1968 NIU gridiron schedules did not feature enough major-college opposition.

For two consecutive summers (1968 and 1969), Evans’ successor as AD, Dr. Robert Brigham, and sports information director Owen “Bud” Nangle appeared before the media-laden NCAA Classification Committee that was administered by the FWAA and chaired by Furman Bisher, the well-known and long-time sports editor of the Atlanta Constitution.  The two NIU administrators presented the group with the philosophy, budgets, schedules, and facility plans for the Huskie future.

On June 30, 1969, the NCAA announced that Northern Illinois, Idaho, Pacific, and San Diego State would be elevated to University Division status (later to become Division-I, Division-IA, and now FBS).  At the time, NIU joined Illinois and Northwestern as the only FBS programs in the state and among the select group of 118 nationwide.  In 2019, there were 130 FBS programs.

If Evans, Dr. Brigham, and Nangle ushered the men to their D-1 status, then women’s athletics matriarch Dr. Mary Bell, and her AD successors, Debbie Brue and Susie Pembroke-Jones, did the same for their gender.

Women’s athletics dates back to the NIU’s founding, too.  Pioneer Northern Illinois State Normal School teams in basketball engaged in the intense intra-school Ellwood / Glidden rivalry—two campus societies named for two of the institution’s founders.  By 1905, the NIU women played “outside” competition.  But World War I curtailed the “interscholastic” scheduling.  In 1922, competition in the major NIU women’s sports—-field hockey, basketball, and softball—was suspended in favor of more student participation in intramurals.

This was the campus origin of the WAA—Women’s Athletic Association—and subsequent WRA—Women’s Recreation Association—that existed until the late 1950s.  Thanks to Dr. Bell, the Huskie women moved to an “extramural” model with modest basketball schedules in 1957-58.  By 1968-69, the NIU basketball schedule expanded to 11 games when the Huskies finished 8-3, including triumphs over Big Ten opposition Illinois and Northwestern.

As the women’s programs evolved nationally, Dr. Bell was the driving force behind NIU’s entrance into the Division I level of the Association for Intercollegiate Athletics for Women.  One of 278 charter AIAW members, NIU joined on October 28, 1971.  Highlights of the Cardinal and Black’s 11-year AIAW tenure were the Huskies’ 1982 National Championship in badminton and 1972 “Elite Eight” tournament advancement in basketball.

In the interim, athletic philosophies changed and many national administrators felt both the men’s and women’s sports should be conducted under one national governing body.  For the 1982-83 academic year, NIU joined the MAC and NCAA.