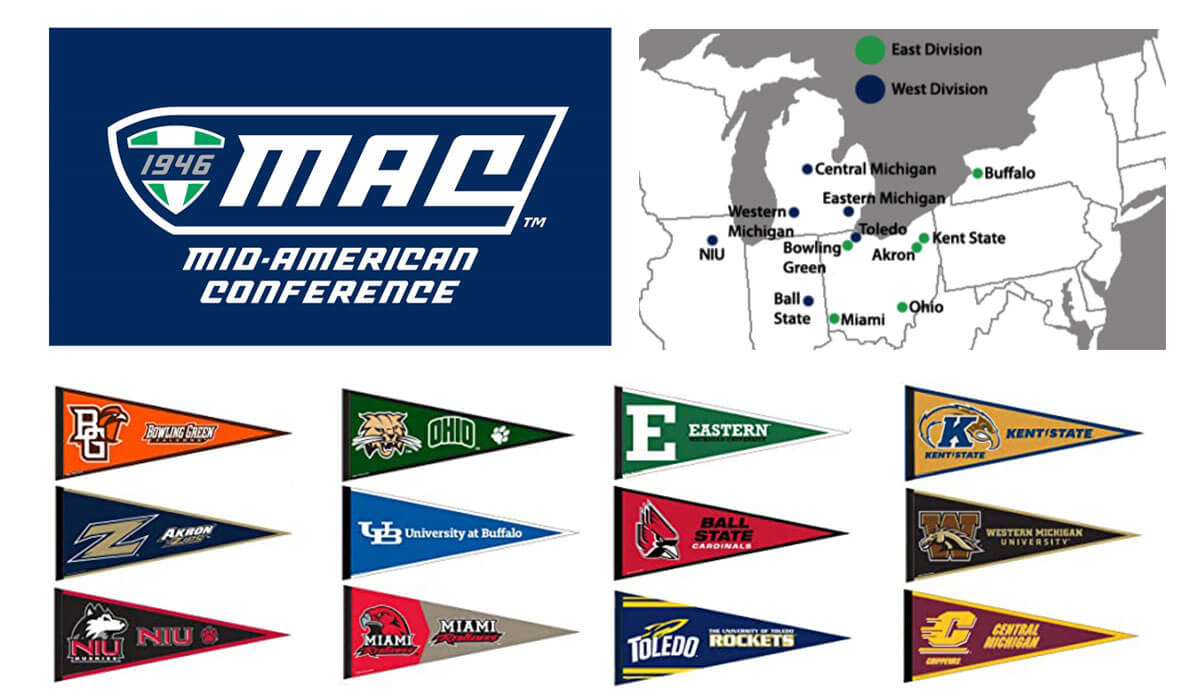 For Northern Illinois University intercollegiate athletics, membership in the Mid-American Conference is literally a “Back to the Future” story.

As NIU’s enrollment, campus, and aspirations grew in the 1960s, the Huskies had outgrown their College Division home. It was time for “major-college” status in athletics. NIU men’s sports had moved to the NCAA University Division in 1967-68, followed by football in 1969. The next step?

Affiliation with a recognized Division I conference.

To then Northern Illinois men’s athletics director George “Chick” Evans, there was only one choice.

“I think we will get into the MAC if we want to,” Evans told The Northern Star prior to his retirement in 1968. “I know of no other conference that we could get into of equal status. You can’t ‘manufacture’ a conference or group of schools. It’s impossible because there is no ‘group.’  The MAC is a fine conference and a natural grouping of schools. We’ve got to get in a conference that will do us good—that has respect and that’s the MAC.”

The courtship took some time. Through the efforts of Evans’ successor, Bob Brigham, and sports information director Bud Nangle, who, behind the scenes, had canvassed various Mid-Am administrators about NIU’s possibilities since the mid-1960s in his previous role as executive sports editor of the Toledo Blade, the MAC started looking at expansion. Eventually, Central Michigan and Eastern Michigan gained admittance in 1971, then Ball State in 1973.

On March 7, 1973, at a press conference in Chicago, league commissioner Fred Jacoby and Brigham made the historic announcement that NIU was in the MAC. That fall, the Huskies made their official debut in the Mid-Am men’s cross-country championships. Football was not integrated into the MAC until 1975 and men’s basketball in 1975-76. NIU women’s sports joined the NCAA and the MAC in 1982-83. Men’s golf captured NIU’s first MAC team championship in 1976.

Due to athletics philosophical differences, Northern Illinois left the MAC after the 1985-86 academic year to compete as a major independent in football.

After several years, a series of other league memberships, and a self-perceived loss of its regional athletics identity, NIU sought to get “back to the MAC.” Thanks to the efforts of President John LaTourette and AD Cary Groth, the Huskies regained MAC status in June, 1995, when then league commissioner Jerry Ippoliti announced the readmission of NIU and Marshall, plus Buffalo, creating a 12-school, two division conference.

“We’re thrilled about rejoining the MAC,” Groth said in an understatement.